BRENTWOOD, Essex, 5th December 2011 – Ford Motor Company has unveiled its latest model, only this time it isn’t a new vehicle. Instead a fashion model demonstrated how a variety of Ford Focus car parts could be the subject of a stylish photo shoot. 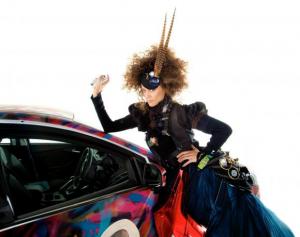 The unique fashion items, a dress and necklace made of Ford car parts, were commissioned as part of the company’s centenary tour, a month-long event celebrating 100 years of Ford in Britain.  They were designed by two accomplished young British designers.

Accepting the challenge to design a dress for the occasion was nominee Scottish Designer of the Year, Judy Clark, who worked with the late Alexander McQueen.

“My reaction when they approached me was one of delight to be a part of such a unique project as it’s very different to what I normally do,” she said. “I would say that the inspiration for the dress was taken from the Edwardian period and I actually started to design the dress before the car parts arrived.”

The necklace was the work of Katherine Hawkins from Cornwall who runs a jewellery design business called Creme Noveau. Describing the inspiration behind the necklace as a tribute to Metropolis, the vintage science fiction movie, Katherine said that she was rather daunted by the prospect when she was approached by Ford.

“When the box of car parts arrived, I didn’t really know what to expect,” Hawkins said. “It doesn’t help that I can’t actually drive so at first I didn’t know what the parts were for! But once I got them spread out to see how they look and sit and how I could work with them, the idea came very quickly and I was able to use really cool metals, plastics and rubbery bits!”

The shoot was handled by photographer, Andy Fallon, who has contributed to magazines ranging from Rolling Stone Magazine to FHM.

Koodle Doodle Bursts Into The Market Place With A Bang!

Popo On A Roll Stateside, Courtney Ready For The Run-In