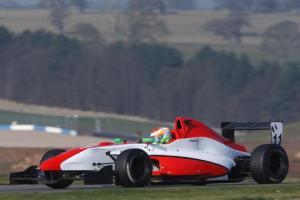 Indian car racing rookie Shahaan Engineer will make his full season debut directly in Europe rather than the UK this year it is confirmed today, Wednesday, 21st March, after switching to the prestigious Formula Renault 2.0 Northern European Cup (NEC) with Fortec Motorsports.
Following the news the Certina Formula Renault 2.0 UK Championship is being shelved for 2012, 16-year-old Shahaan will now race in the NEC series which utilises the same FR 2.0 car he has been testing during recent weeks and months.
Although the first official test of the Formula Renault 2.0 NEC pre-season has already taken place, Shahaan will be able to take part in the second test at Hockenheim in Germany tomorrow, Thursday, 22nd March, and Friday, 23rd March. The home of the FIA Formula One World Championship’s German Grand Prix will also host the first races of the NEC season on 21st/22nd April.
“This is a major development for my career and a very exciting one, the NEC is incredibly competitive and has a very strong grid of international drivers – I can’t wait to test at Hockenheim later this week”, said Shahaan.
“Testing in the UK has gone really well and although we know this move is going to be a huge challenge for my first full season in cars, it’s going to accelerate my development and give me great experience of some of the top European tracks and F1 venues like Hockenheim and Spa.”
Formula Renault 2.0 Northern European Cup has emerged as the one-make championship that complements Eurocup Formula Renault 2.0 as the strongest on the globe. Valtteri Bottas, champion in 2008, is already part of F1 as test driver for Williams-Renault while reigning NEC Champion Carlos Sainz Jr is part of the Red Bull young driver programme and will race in British Formula 3 this year.
The NEC is entering its seventh season in 2012 and a grid of well over 20 cars is expected for the first event of the year. Following the season opener at Hockenheim, the series visits Spa-Francorchamps in Belgium before returning to Germany for two events – Nurburgring and Oschersleben.
From there, the second half of the championship will commence in early August at Assen in The Netherlands before visiting the Red Bull Ring in Austria and Most in the Czech Republic, prior to the season finale at Zandvoort on 22nd/23rd September.
“You have to race against the best drivers to try and be the best yourself, close competition is what I enjoy the most about racing and it doesn’t get much closer than in the NEC”, added Shahaan, “We’re really excited about this new opportunity that has arisen. I have another big learning curve with all new circuits to adapt to but I’m confident we can have a strong season.”
Keep up-to-date with Shahaan’s progress throughout the year at www.shahaan.com follow him on Twitter @ShahaanEngineer and also on Facebook at www.facebook.com/ShahaanEngineer