The God Delusion?  It’s the Meat Delusion that’s the real problem
Telling the truth that
Jamie Oliver, the BBC and Channel 4 don’t want you to hear 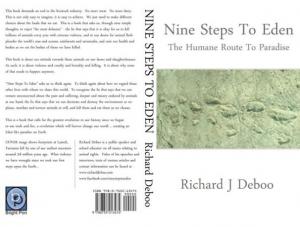 Announcing the e-book Kindle release of the acclaimed book “Nine Steps To Eden: The Humane Route to Paradise” by Richard J Deboo.Through nine simple chapters “Nine Steps To Eden” dismantles the fictions and myths that have supported what Richard calls “the meat delusion.”

Television has been one of the worst propagators of this lie through Jamie Oliver’s endorsement of the pig-farming industry on Channel 4 and the BBC’s fabrication of animal slaughter in programmes such as “Kill It, Cook It, Eat It.”  Richard shows that these programmes perpetuate the lie that it’s “good” to have meat in our diet and it’s “good” to kill animals for our food.

“Nine Steps To Eden” shows that those animals are not food for humans, that in fact humans are naturally a plant-eating species.The only reason we continue to eat animals when we do not have to is because of the lies we are told and the lies we tell ourselves.We believe that we can treat animals so badly because we do not believe that those animals deserve to be treated with kindness and compassion.

Richard tears the fictions apart one-by-one.From the lie that we must eat meat through to “Descartes’ fantasy” that animals do not feel pain, Richard examines the damage done to our health and the health of the planet, and concludes with the destruction of the pretence that animals are not worthy of the lives that they have. “Nine Steps To Eden” shows us how we can all think differently and in the process make a better world – a world with less suffering, less pain, less violence and less killing than the world we have now. By thinking and acting differently we can create an Eden-like paradise on Earth.

________________________________________
Some of the Amazon reviews for the paperback edition of “Nine Steps to Eden”
“The book everyone should read.This book has changed my life. I have been a vegetarian for 18 years & had been deciding whether to make the step to veganism. I wanted to settle in my mind the logic behind it and put away the doubts of ‘what will I miss’ and ‘what will people think’.After reading this book- there is no other choice for me other than veganism.It gives clear explanations and backs up arguments with clear answers.This is the book that millions of meat eaters should read but will choose not to read.”
“Masterpiece.Nine Steps to Eden is an exceptionally well written look at human treatment of other animals. It will really make you look at our world in a different light, one that makes you want to change everything you’ve ever learned. This will be a classic among animal rights and welfare literature. I highly recommend this.”
“A must read!This is a fantastically written book which picks apart the arguments used for defending meat consumption in an easily understandable way. The author’s points are put across in an eloquent and intelligent manner and once you’ve read it, giving up animal products will not only make sense, but will be an easy thing to do. I would recommend this book to anyone looking for an introduction to veganism and animal rights issues – there is even a handy further reading list at the back if you want to explore the issues further. It was also refreshing to read a book which addressed the UK perspective, there are many fantastic books on this issue written by American authors, but this one helps the UK ‘that doesn’t happen here’ myth. Read it, you won’t regret it!”
“Superb!Every book I read on this subject has my cynical eye checking to see if it’s also accessible to staunch meat-eating family, friends & acquaintances…. alas, most do not as they cannot reach the parts that this one does. The writing style is a rarity in the world of educational reading. It’s as if he’s sitting there talking to you & like all the best books, the real-world kindly clears off. This is what makes this a unique wake-up call on the subject ~ he has sucked you in & then spat you back out into the inescapable fact that this *is* the reality of the world in which we are living & sadly most are oblivious to.He’s like a smooth talker cleverly luring you in, sneakily prising your eyes open to life & then making you feel empowered by reawakening your (com)passion & drive. Very clever man.“

In Search Of Lost Knowledge By William Grove