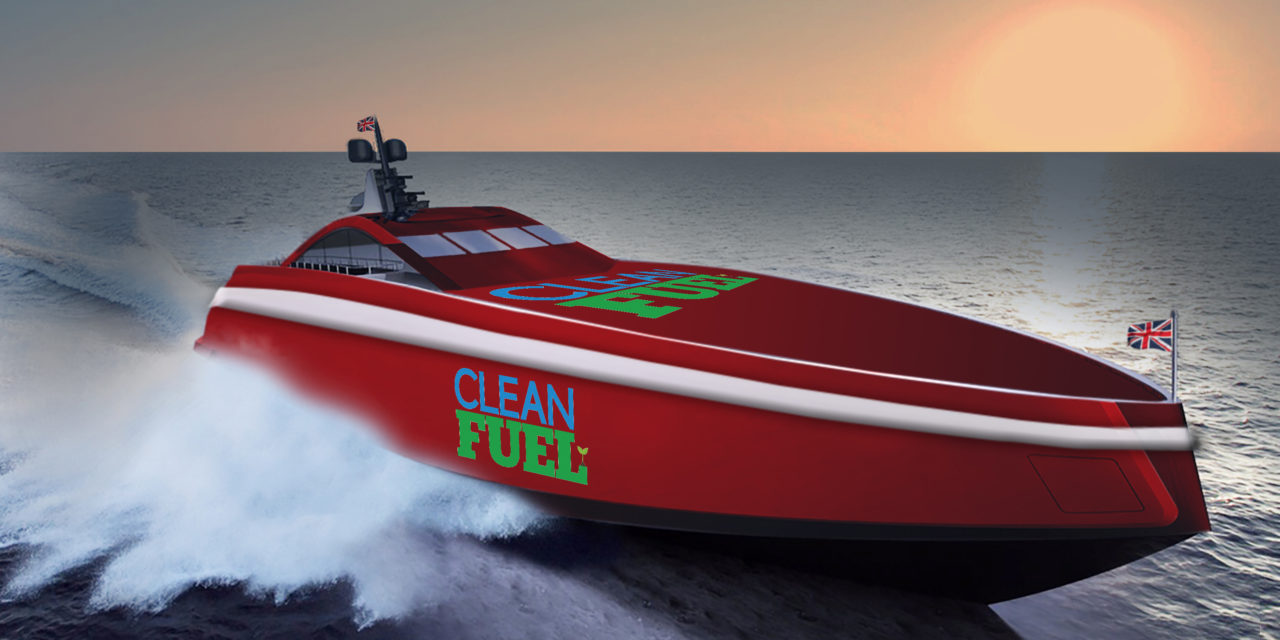 Win a place on Team Britannia’s Superboat that will be used to break the round the world record.

The competition is being launched to help fund the final stages of the fit out and launch of the 80ft vessel named Excalibur.

The Superboat is a completely new design from Professor Bob Cripps, former Technical Director of VT Halmatic. It has been designed in the UK and has been built near Portsmouth out of marine-grade aluminium. It encompasses an exceptionally efficient hull, which will cut fuel consumption by up to 30 per cent and allow the Superboat to travel further without stopping to take on fuel.

Ocean racing legend and team principle Alan Priddy, commented: “This is a once in a lifetime opportunity for 12 lucky winners to join us on board Excalibur for a leg of the challenge as we break the round the world record and to support a Great British project.”

Alan decided that as the Superboat nears completion it was the ideal time to raise some additional money and to expand the team.

He continued: “We have an amazing team who are working hard with our existing partners and sponsors, but the instability caused by Brexit has seen a number of companies we have been speaking to defer any decision. While they recognize our unique offering, environmental programme and our incredible crew, they have been clear that they are holding on to cash, should the worst happen. As a businessman, I have some sympathy with this.

“But we can’t continue to wait. The construction of the Superboat is complete, the fitting out is underway and the crew and I are ready to go. So we are going to open this up. We will make 12 places on the Superboat, available to members of the public who can answer a simple question and part with a little money.”

Competition entrants will also receive 25 shares in Clean Fuel, the company behind Hydro Diesel, a revolutionary fuel emulsion, a mixture of diesel, water and emulsifying agent that when burnt cuts harmful emissions such as particulate matter and nitrogen dioxide.

Team Britannia hopes to smash current held by the New Zealander Pete Bethune at 60 days 23 hours 49 minutes by up to 10 days.

Setting off from British Gibraltar, Team Britannia will plan to call at Puerto Rico, Manzanillo, Honolulu, Guam, Singapore, Oman and Malta to take on fuel. Additionally, they will pass through the Suez and Panama Canals.

In addition to the main round the world powerboat record, the trip qualifies for a slew of other records, which are part of the seven stages or legs. In some cases, the Team will set these ‘unsupported records’ providing crew members with the opportunity to gain more than one world record.

Dr Priddy continued: “It has certainly been a longer process than anyone thought at the beginning, with some unfortunate delays, which were beyond our control, but our Superboat is nearing completion. All of the fabrication is finished, fitting out has started and just a small amount of welding remains in the wheelhouse. So this seemed like the ideal time to expand our crew by offering members of the public to become world record holders.”

The crew will leave in one of the two annual weather windows, March or October once the Superboat has been launched and completed sea trials. In September the 20-tonne Superboat was lifted and turned 180 degrees to allow the flybridge to be added and work on the vessel’s distinctive wheelhouse to be completed. This has been done, while the chief engineer Steve Mason has continued fitting out the vessel and small patch of the wrap has been stuck on the boat to show her distinctive colour.

Dr Priddy concluded: “The fitting out is underway, while a small amount of welding to the cabin remains outstanding. We have also started to fit the miles of cabling that will allow us to monitor every possible aspect of the record attempt, from the crew to the engines. The next big milestone will be commissioning of the Superboat’s two FPT engines and jets that will power it on the 42,000-kilometer record attempt.

“So now is the time for people to get involved in this British record attempt and they can do this by clicking on teambritannia.co.uk and following the link to the competition.”

Those wishing to enter should go to teambritannia.co.uk where there is a full set of terms and conditions.

The effects of the emulsified fuel on the engines and the emissions will be monitored for the duration of the voyage and the results published online.

Team Britannia is a multi-million pound British bid to design and build the fastest and most fuel-efficient semi-wave slicing Superboat to circumnavigate the globe for the much-coveted UIM world record, currently held by the New Zealander Pete Bethune at 60 days 23 hours 49 minutes.

The World Record Authorities (UIM) dictate that for a recognised circumnavigation the craft has to pass through the Suez and Panama Canals, cross the Tropic of Cancer and the Equator and must start and finish the journey in the same place.

The Superboat is a completely new design from Professor Bob Cripps, former Technical Director of VT Halmatic. It has been designed in the UK and encompasses “an exceptionally efficient hull,” which will cut fuel consumption by up to 30 per cent.

In addition to the design the vessel will be powered by a revolutionary fuel emulsion, a mixture of diesel, water and emulsifying agent from Portsmouth based Clean Fuel Ltd. This will reduce harmful emissions such as particulate matter and nitrogen dioxide.

The effects of the emulsified fuel on the engines and the emissions will be monitored for the duration of the voyage and the results published online.

The Superboat is being built by the Aluminium Boat Building Company in Hampshire, out of marine-grade aluminium. The metal was produced by Blackburns Metals and laser-cut by specialist firm Aalco in Southampton.

In September 2018 the Superboat was turned to facilitate the fitting out process, including the installation of the engines and jets.

When completed the boat will showcase nearly two-dozen leading marine companies, which are supporting the project with their expertise and equipment.

Team Britannia will launch their record from Europa Point in Gibraltar following sea trials in one of the two annual weather windows.

For more information and regular updates visit: www.teambritannia.co.uk or @team_britannia