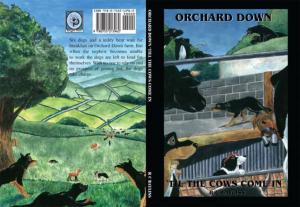 In a new graphic novel ‘Orchard Down Till the Cows Come In’  by R C Bayliss, this point is illustrated to the extreme. When faced with the prospect of not getting any milk for breakfast the dogs take charge. But all this is actually based on real life. Two of the chief characters, Sam and Jack, grew up together as pups and the idea for the book came when the author noticed just how much the dogs would work out for themselves.

Jack would always finish his food before Sam. Being a labrador, Jack’s stomach was a bottomless pit that could never be filled. Knowing of Sam’s fondness for chasing things, especially cats, Jack herded a group of cats to run past Sam. Sam could never resist and always gave chase. Then Jack would dive in from cover, wolf down several large mouthfuls and hide before Sam returned.

It was situations like this that inspired the author to put it down into a book. And since a lot of dogs communicate in body language, it seemed better to do it as a graphic novel,  letting the pictures tell most of the story.

The author has had many dogs in his lifetime, mostly border collies and labradors and one thing he is sure of ‘there is no such thing as a dumb animal and certainly not a dumb dog’.

In Search Of Lost Knowledge By William Grove