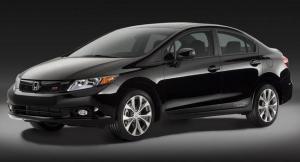 This year marks the Honda Civic’s 40th anniversary in the UK since when it has been through eight different incarnations and sold over 650,000 models. And this year, Honda has come up with what may well prove to be the best Civic of the lot in its ninth generation.

The all-new Civic 2012 is half sport car, half saloon. It looks a little like something designed to explore other galaxies – which rather sets it apart from the Focuses, Astras and Golfs. And that’s what has been so great about the car sine its inception back in 1982.

For the last few years, the Civics have been manufactured right here in the UK – by 3,000 people in Swindon, in fact.

From the time the first little Civic arrived in 1972, through to the 1980s when the CRX souped-up version came along – to the eighth generation that looked truly different from any other car on the road – all the way to 2010, the Civic has always been chosen by Honda to be a little bit different.

And the 2012 Honda Civic version also remains true to is true to its founder Soichiro Honda’s core founding principles – that the vehicles his company produced should be technologically innovative.

The interior, technical specification and the range of new innovations included with the new car more than pay testament to the company’s principles – as you’ll quickly see if you look at the tech-spec and step inside the latest Civic.

But if there’s one feature that sells more cars than any other it is, of course, external design. And the new car has been shaped, painstakingly, in the wind tunnel. The overall effect is one of “love it or hate it”. Clearly, most UK buyers love the Civic – and the latest one will be no different.

Driving Safely Into The Summer Holidays