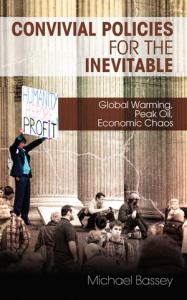 With the economy flatlining it is an opportune moment to examine the unconventional idea that to tackle global warming effectively and to prepare ourselves for the inevitable decline in oil, it will be necessary for rich industrial countries like these in the UK to end the pursuit of economic growth.

In the pages of this passionately argued book, Michael Bassey spells out what he sees as our inevitable future — one where we are forced to develop long-forgotten skills and relate to each other in long-forgotten ways, simply because there’s no longer any alternative. Minimum& maximum wages, national self sufficiency in energy and most food stuffs, and the curtailment of stock exchange speculation.

But, ever the optimist, he sees such a future in a positive way, a convivial one, where today’s superficial ‘wealthist’ way of life — fast cars, designer clothes and the latest technology — no longer has a place, and where instead we rethink democracy, education and economics and begin to care for everyone in our local community again.

Whether this prospect intrigues you or fills you with horror, if Michael Bassey is right, it’s going to happen — so you’d do well to open the book and find out more about the inevitable face of the future.

Known as ‘an angry young man of science’ in the 1960s when he worked at the University of Sheffield, Michael Bassey now describes himself as ‘an angry old man worried about the future’. His career started in chemical research, followed by a period in industry as an agricultural economist and ended as an emeritus professor of Education at Nottingham Trent University. He is an academician of the Academy of Social Science. He has written and been published extensively in the fields of education, the environment and sustainability. European Environment 1975-2000 (Conservation Trust) and Education for the Inevitable (Book Guild Publishing) are forerunners of this current book. Michael lives in Nottinghamshire.

One Direction What Makes You Beautiful