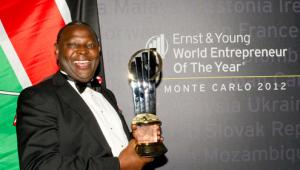 MONTE CARLO, 9 JUNE 2012 – James Mwangi of Kenya’s Equity Bank was last night named the Ernst & Young World Entrepreneur Of The Year 2012 at an awards ceremony held in Monte Carlo’s Salle des Etoiles.
James Mwangi was picked from among the 59 country finalists vying for the title across 51 countries, each of whom had already been named the Ernst & Young Entrepreneur Of The Year in their home country.
Equity Bank is the largest bank by customer base in East and Central Africa and the largest African majority owned company in the region. The bank has more than seven million accounts representing over half of all bank accounts in Kenya. It also has operations in Uganda, South Sudan, Rwanda and Tanzania.
“I’m honored to accept this award on behalf of the people and customers of Equity Bank”, said James. “This is a global recognition for Africans who are embracing the power of entrepreneurship to change the economic and social state of Africa.”
The independent judging panel was a distinguished group of former Entrepreneur Of The Year Winners. The panel was chaired by Ruben Vardanian, President, Troika Dialog, of Russia. Joining Ruben on the panel was:
Jim Turley, Global Chairman and CEO of Ernst & Young, said, “Over the past 26 years, entrepreneurs have done more than any other group to stimulate innovation, job creation and prosperity during both periods of growth and in challenging economic conditions. James Mwangi epitomizes the vision and determination that set entrepreneurs apart and is very worthy of the title Ernst & Young World Entrepreneur Of The Year 2012.”
About Dr James Mwangi and Equity Bank Limited
Dr. James Mwangi has been pivotal in the transformation of Equity Bank from a failing micro-finance institution to a publicly listed commercial bank. He has also driven the bank’s aim to transform the lives and livelihoods of people socially and economically by giving them access to modern, inclusive financial services that maximize their opportunities.
The bank is rated the biggest by customer base and African majority owned company in East and Central Africa. The more than seven million accounts represent over half of all bank accounts in Kenya. Regional operations exist in Uganda, South Sudan, Rwanda and Tanzania.
James has been pivotal in the bank’s investment in a robust IT platform that can accommodate 35 million accounts, as well as a level four data center – the only one of its kind in Sub-Saharan Africa – giving Equity a lead in creating synergy between banking and mobile telephones. Other innovations include Mkesho, the world’s first mobile centric bank account, Orange Money, a mobile money transfer platform for Orange Telecom subscribers, and agency banking.
Through strategic capitalization, Equity Bank attracted the single largest capital injection in East & Central Africa’s history (US$180m) from Helios EB.
James is also Chairman of Equity Group Foundation, established to scale up the existing CSR initiatives of the Group. In recognition of the diverse nature of socio-economic needs in Africa, the Foundation has identified six program areas; education and leadership development, agriculture, financial literacy & entrepreneurship, health, innovation and environmental sustainability. The Foundation has partnered with the MasterCard Foundation to form the largest Secondary Education and Leadership Scholarship Program in Africa.
In FY09-FY10 the bank’s turnover increased by 32% and its assets by 42%. In 2010, the Financial Times named James as one of the top 50 emerging market business leaders.
About Entrepreneur Of The Year
Ernst & Young Entrepreneur Of The Year is the world’s most prestigious business award for entrepreneurs. The unique award makes a difference through the way it encourages entrepreneurial activity among those with potential, and recognizes the contribution of people who inspire others with their vision, leadership and achievement. As the first and only truly global award of its kind, Ernst & Young Entrepreneur Of The Year celebrates those who are building and leading successful, growing and dynamic businesses, recognizing them through regional, national and global awards programs in more than 140 cities in over 50 countries. 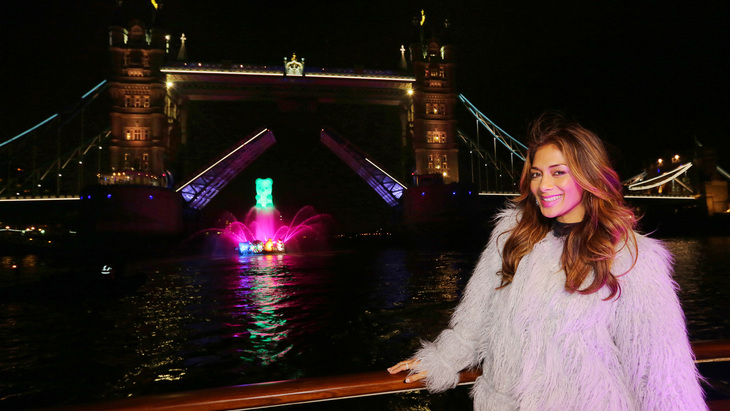