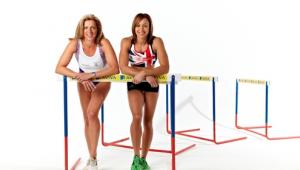 Britain’s most successful female athlete, Sally Gunnell, and World and European heptathlon champion Jessica Ennis, were brought together by Aviva – supporters of British athletes since 1999 – in an opportunity to share their experiences and see what it really takes to reach the pinnacle of their sport.

Ennis, who will be heading off to South Korea with the Aviva GB & NI Team in August to defend her World Heptathlon crown, received some invaluable insight and advice on what it takes to win Gold from the former Olympic Champion. Both athletics stars have also become inspiring role models for the next generation, and highlights the strong legacy of inspirational sportswomen Britain has produced.

For more information, and to follow Jessica and Sally’s story, visit www.aviva.co.uk/athletics