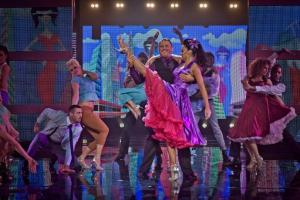 Eastenders’ Tameka Empson and Laurie Brett along with comedian Terry Alderton are the first two acts to boogie their way into the final of Let’s Dance For Sport Relief, after impressing viewers with their show stopping performances in the first show of the series.

Presenters Alex Jones and Steve Jones announced that viewers had voted Tameka Empson and Laurie Brett through to the live final on Saturday 17 March, after their spectacular performance of Telephone, Lady Gaga and Beyonce.

Runners-up Terry Alderton and Tony Blackburn and David Hamilton then faced the three panellists, Greg Davies, Keith Lemon and Graham Norton, who were left to decide which act deserved to win the second coveted place in the final, after their performances of Proud Mary, Tina Turner and Push It, Salt ‘n’ Pepa respectively.

Panellists Greg Davies and Keith Lemon both voted for Terry Alderton giving him the majority vote and a place in the final alongside Tameka and Laurie.

Graham Norton: “You could have heated your tea up on that, it was hot, hot, hot.”

Greg Davies: “I haven’t actually seen the original Lady Gaga video but it can’t have been better than that. Honestly half way through I just started roaring like a lion.”

Keith Lemon: “I got all butterflies in my thighs and it went to my hidden bits. It was amazing.”

On confirming his place in the final with a fantastic performance Proud Mary, Tina Turner, Terry Alderton said: “I can’t wait, I think you’re going to be a bit worried I’m coming back.”

The viewers’ favourite Tameka Empson and Laurie Brett then closed the show with one more rendition of Telephone.

There were also performances from JLS who sang their hit ‘Do You Feel What I Feel’ and Jessie J who sang her number one song ‘Domino’.

Next week, five more celebrity contestants will take to the floor in a bid to wow viewers with iconic dance routines and win a place in the final of Let’s Dance For Sport Relief. Next week’s show will air on BBC One and BBC One HD at 7.10 – 8.30pm.