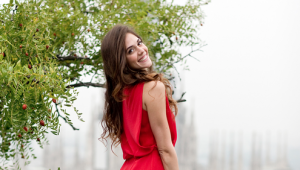 Bárbara González, 27, from Pamplona, Spain, has been crowned the winner of the MARTINI® Royale Casting and will follow in the footsteps of previous MARTINI® stars such as Charlize Theron, Naomi Campbell and Monica Bellucci.

Bárbara’s first role will be to star in a new advertising campaign for which will air in December 2012. Bárbara will also receive €150,000, 12 pairs of Christian Louboutin shoes and 12 designer outfits from my-wardrobe.com. Bárbara has an exciting year ahead and will join Yuri Buzzi, winner of the 2011 MARTINI® Kisser Casting, playing a lead role in the MARTINI® 150th anniversary celebrations throughout 2013.

The MARTINI® Royale Casting was a global search to find a woman who best personified the philosophy of the iconic brand – LUCK IS AN ATTITUDE. International judge Christian Louboutin helped to launch the campaign which ran in 23 countries at the London Design Museum in May.

More than 3,500 women applied and were whittled down to just 28 semi-finalists who competed in a series of challenging tasks on the beaches and hot spots of Ibiza in August. These challenges, designed to showcase the attitude, style and personality of the candidates were all filmed as part of an entertainment series shown on facebook.com/MARTINI. The 28 semi-finalists then battled it out to gain the most votes and earn their place in the final stage of the search in Milan. Through and online contest, the public voted in the thousands for their four favourites while three additional “wildcards” were chosen to travel to Milan for the final competition by an international judging panel consisting of Christian Louboutin, my-wardrobe.com founder Sarah Curran, and MARTINI® Global Category Director, Arnaud Meysselle. The seven finalists hit the streets of Italy’s style capital in the final chapter of the MARTINI® Royale Casting and had the unique opportunity to visit the home of MARTINI® in the town of Pessione near Turin. At Pessione, the finalists discovered more about the rich history and heritage of  one of the world’s great, iconic global brands and its drinks.

Bárbara, who has competed for Spain at the Sydney and Beijing Olympic Games as a rhythmic gymnast, is now passionate and determined to become an actress. It was her charismatic and stylish attitude that shone through to the International judging panel. Following the announcement, Bárbara said “I’m very happy and this is a dream for me. I will work very hard to make everyone that has made this possible very proud of me”.

Christian Louboutin commented, “I was looking for someone who is happy to show her true character and Bárbara surprised me with her sense of fun and smart attitude.”

Watch the reveal of Bárbara as the next MARTINI® star at youtube.com/martini

For any links in digital media, please embed with the following link Http://youtu.be/l9uWa_WesgE

From Britain With Love …..