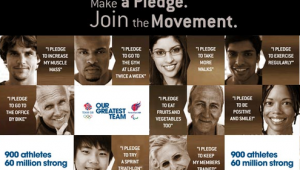 Technogym, official supplier of sports equipment to the London 2012 Olympic and Paralympic Games, announced its Make A Pledge campaign last night from the Italian Embassy in London’s Mayfair. The campaign, launched in support of Team GB’s “Our Greatest Team” initiative, is encouraging every member of the UK public to “Make A Pledge” about how they will move toward a healthier and more active lifestyle in 2012 and beyond. The campaign will focus on London 2012 being the first Olympic Games to advocate a nationwide feeling of wellness and will be promoted in Technogym’s 5,000 premises throughout the UK

Hosted by Italian Ambassador to the UK, the reception allowed dignitaries to meet with Technogym ambassadors including UK 400m hurdler and Beijing gold medalist Christine Ohurougu and T35 sprint Paralympian Sophia Warner.  The event also featured speeches from CEO of London 2012 Paul Deighton, CEO of the British Olympic Association Andy Hunt, CEO of the British Paralympic Association Tim Hollingsworth and was concluded by an address from Nerio Alessandri, President and Founder of Technogym.

Britain’s swimming stars are in London this week