The Lopez Family – The Olympics’ Most Successful Siblings 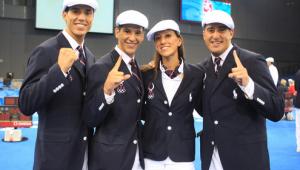 Mark took the silver medal and Steven and Diana both brought home the bronze, with older brother Jean bursting with pride for the siblings he coached to victory.

Now they are currently in training for the 2012 London Olympics. They’ll all be heading to London, but this time around Mark will serve as a training partner, having narrowly lost out on qualification on the U.S. team alongside Steven and Diana. Oldest brother, Jean, will once again be their coach.

The Lopezes are an inspiring story of a family united by a dream. They run a taekwondo academy near their home in Houston, Texas and their incredible success has been credited with putting the sport of taekwondo on the map in the United States.

STEVEN LOPEZ, aged 33, was the first official Olympic gold medallist in Taekwondo in Sydney 2000. He followed up with a second Olympic gold medal in Athens in 2004, and won Bronze at the Beijing Olympics in 2008. He also became the first athlete to win five back-to-back World Championships in the sport – winning gold in 2001, 2003, 2005, 2007 and 2009. He was named on People’s 50 Most Beautiful People list and on the list of 100 Influentials of 2008 by HispanicBusiness.com.

Team Ralph Lauren
Ralph Lauren is the official outfitter of the US Olympic and Paralympic Teams for London 2012. Building on the success of the company’s involvement in the 2008 Olympic Games in Beijing and the 2010 Olympic Winter Games in Vancouver, Ralph Lauren will design the official Opening Ceremony and Closing Ceremony parade uniforms for Team USA, as well as a unique collection of village wear apparel and accessories.