She’s the star of British cycling, as famous for her two gold medals as she is for her love of glam heels, and we’re delighted that Victoria Pendleton is a fan of Shoes of Prey!

Pendleton, winner of Great Britain’s third gold medal at the London 2012 velodrome, picked out a pair of our red, white and blue platform oxfords before the games, describing the patent leather style as “definitely very cool”.
“Victoria is CRAZY about her shoes,” confirmed her agent. “She has been telling everyone about them and is literally blown away by how lovely they are. She’s unlikely to get the chance to wear such high heels before the Olympics, but she hopes to have a massive occasion to wear such patriotic shoes this summer!!!!!!”

As it turns out, Victoria had the chance last night in London, where her heels offered the perfect finishing touch to her white-blouse-and-navy-shorts ensemble. 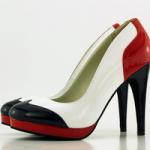 Urbanista Gets Lashed This Party Season